The Freedom of Form Foundation was founded in 2018 as a nonprofit corporation. Our five cofounders – Michael, Daniel, Matt C, Matt F, and Keiran – all share a dream of what’s possible. We came together after numerous discussions with friends and family, discovering that countless more people share similar dreams.

We started the Freedom of Form Foundation for one purpose: to make it possible for people to outwardly express their inner identity through easy, safe, customized body modifications. This covers everything from gender expression, to tails and changed proportions, to expression of totally different species! Rather than asking “why?”, we would ask “why not?” – advancing the options for methods of self-expression via morphological freedom can only be a good thing.

All of us have somewhat differing ideas on the specifics – some of us favor one technology, while others favor different ones – but we all agreed on the importance of research, and more broadly in inspiring people to come together for a common goal. While we don’t have all the answers, we do know all the challenges before us are tractable, and can be overcome with the right effort.

Many of us have substantial scientific or engineering training, including a mix of people with bachelor’s, master’s, and PhDs, so we can optimally guide the directions of our research. Equally important, we have experience in administration, working with the government, coordination or event planning, and engaging with the lay public.

This is a task far too great for any one individual to overcome. We are building an organization that will foster the positive development, and deployment, of our (literally) transformative efforts. Michael recently earned his PhD from Harvard University, in Biological and Biomedical Sciences. His PhD research focused on neuronal regeneration in the central nervous system. In 2017, he led publication on a major paper in the scientific journal Neuron describing how a gene, if overexpressed through a genetic vector, differentially interacts with retinal neuronal cells, resulting in the regeneration of some axons while other retinal cells are ablated. In addition, Michael has co-authored several other academic papers, and led invention on a provisional patent application (submitted 2018) in conjunction with Boston Children’s Hospital discussing novel concepts used in a prototype biological simulation program.

Michael has given several invited presentations to scientific and layperson audiences, including: the Beijing International Forum on Brain Disorders (2017), Boston Children’s Hospital Stem Cell Day (2017), a Scientific Staff Meeting of the Division of Sleep and Circadian Disorders (2016), and the Massachusetts Walks Again fundraiser / political rally (2015), in addition to many poster presentations.

He self-describes himself as a futurist, and believes that biotechnology is laying the basis of the next technological revolution with the tremendous potential to impact not just medicine, but every aspect of our lives. Michael is also a firm believer in individuality and self-choice, and is encouraged by increasing public appreciation that aspects of identity may not match outward appearance. The coincident timing of these technological and social trends should make for a fun, interesting future. And, he thinks it would be totally awesome to have a tail.* Daniel completed a degree at the University of Southampton, in Biochemistry. His dissertation on developing software systems to handle alternative initiation codon prediction and detection, led to follow-up publication in BioCoder. In 2017, Daniel expanded on the details of this project and linked ideas with his team, established an open source repository on his company website and wrote up defensive publications for his systems designs. He has also worked with BioCoder Dojo and Forma Nexus to present DNA separation techniques to a young audience in Cork, Ireland.

He has written several whitepapers and other articles describing aims, methods and construction of gene editing software, hardware and wetware systems as lead-author. His work as founder and CEO of Vulpine Designs Ltd continues to expand on these articles.

Daniel is motivated by a heartfelt desire to see Freedom of Form brought to everyone. To him, this includes using the technologies where possible to improve our chances of curing diseases. Daniel is involved in the hackerspace community, and admires the Demoscene programmers for their extremely resource-efficient code. Daniel intends to combine this with the capabilities of many bioinformatics databases and tools to put the power to decide one’s own genetic destiny in the hands of everyone. He believes evolution is ripe for a revolution, adaptation is ready to be adapted and that this approach will change the way we think about these bodies we inhabit and their health forever.

Matthew holds Dual Majors in Business Administration and Environmental Science from Austin College in Sherman, Texas, and is now employed by the Texas state government. He has experience interfacing between corporations and government offices to ensure compliance with applicable regulations. As our organization will likewise need to comply with complex networks of laws and rules, we will benefit greatly from Matthew’s experience in navigating these types of interactions.

Moreover, his Liberal Arts background provides a broad base of knowledge that is balanced with practical experience in activities ranging from speechwriting, to organizing student events, to accounting. Matthew understands current realities, including the importance of engaging with teams, potential clients, and the broader public, and is continually helping us balance our high aspirations with steady and efficient development of our organization.

Matthew’s vision for the foundation is to facilitate the idea of bodily modification as an acceptable form of self-expression. He’s optimistic about the trajectories of our research, especially on seeing early results from work on neuroprosthetics. He believes the greatest challenges that the organization will face will be (1) social tolerance/acceptance and (2) ensuring the accessibility (not exclusivity) of the results of our research. To combat this and promote acceptance, he is pushing for the development and deployment of a prototype prosthetic limb that would allow not only for someone to experience that ultimate form of self-expression but provide a proof of concept. With this accomplishment achieved, he believes the next steps should be promoting this technology to the public within certain circles and investigate the logistics of mass marketing the creations.

Matt blends thoughtfulness with action, and creativity with rigorous precision. He’s experienced in the laboratory, having worked both as a lab tech and quality control technician for nearly a decade. Even during his college career, he was involved with numerous student clubs, including five as their treasurer. He notes that for each club, he had success in achieving their funding goals, and budgeting actions and items he undertook were universally approved.

More recently, he has been starting a company on the side, focused on writing creative fiction. His company has already put out 2 full-length books and numerous commissioned or crowd-funded stories. Despite just formally starting the company as an LLC earlier in 2018, he’s setting the company up for growth by his leadership. Rather than going solo, he’s getting help on writing, and on customer relations, from 2 other people respectively. He manages compliance needs and balances effort between generating new content, attracting new customers, and keeping up with administrative tasks.

Matt was excited to join the Freedom of Form Foundation due to his long-term interests in morphological freedom, and he will be enthusiastic to use his skills and talents within our organization to make it possible.

Keiran Stevenson is a PhD student in the Department of Cell Biology at the University of Edinburgh. More specifically, he’s studying in the field of synthetic biology, and performing his thesis research in the Pilizota lab. His laboratory’s overall aim is to engineer bacteria to better synthesize ethanol for biofuels production, a deceptively tricky task requiring live quantitative fluorescence microscopy, osmolarity regulation pathways, and stress response mechanisms. He’s also an experienced programmer in Python and MATLAB, and combines custom scripts with established frameworks like TensorFlow to help analyze massive numbers of cells automatically. He already has authorship on three scientific publications in well-trusted journals, including a first-author publication in Scientific Reports, demonstrating his contributions to making synthetic biology more quantitative and predictable.

He’s also been active outside the lab, having volunteered for the “Click” young arts group where he developed skills in video editing and presentation to create promotional materials for Perth, and at the Perth and Kinross Youth council where he gained skills in marketing, team work, event planning, and securing financial resources.

What really motivates him, though, is a challenge. He prefers solving problems rather than pure discovery. From a young age, he’s been a bit of an “engineer”, frequently taking things apart and putting them back together, occasionally to the annoyance of his parents. He’s straddled the line of understanding the world with practical applications ever since, including through his Bachelor’s degree in Biotechnology, and his mixing of attending classes on fundamental biochemistry and human physiology with studies in more immediately tangible efforts like building a new, lower-cost automatic liquid handling robot and improving every-day techniques used in his lab.

The FFF is in the process of making 1-2 direct hires. These will help us improve our internal work effectiveness and ability to coordinate volunteers. The hires will only be part-time for now, and we are fully committed to keeping the costs of overhead as low as possible. 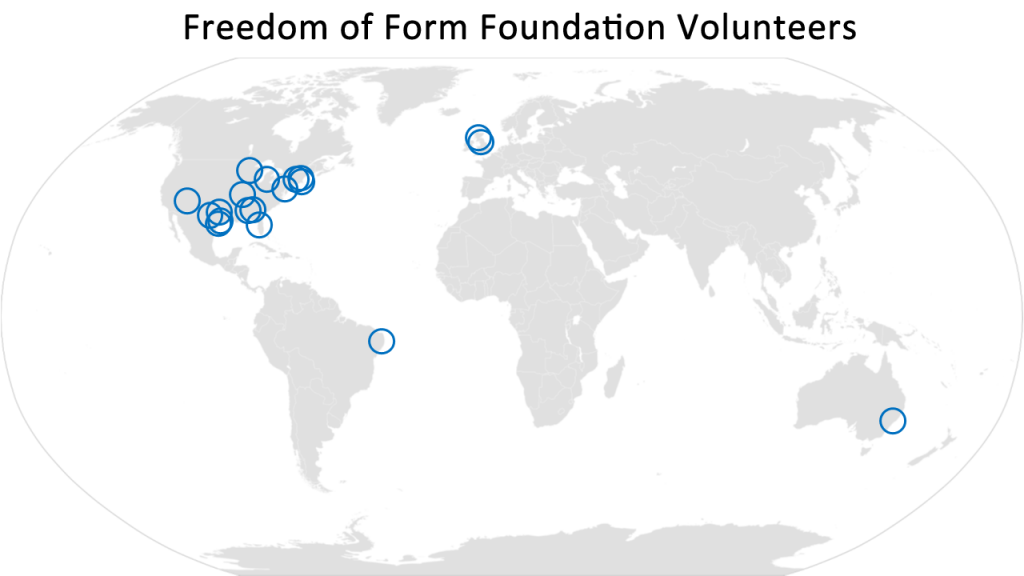 We have several formalized volunteers currently who are helping us with public outreach, community interactions, and other responsibilities. This number may fluctuate based on whether volunteers are able to help on a short-term or long-term basis.

We already have independent reviewers with academic credentials who will help us review the first few rounds of research grant applications we receive. We’ve been impressed with peoples’ willingness to help out with this (and pleasantly encouraged about how easy it’s been to find so many people with impressive resumes!), so adding additional reviewers on an as-needed basis should be quite doable.

We must stress that researchers are funded by the Freedom of Form Foundation through competitive processes, and are not employees. Nevertheless we have already been approached by several individuals who will apply for our funding when we open our application process.