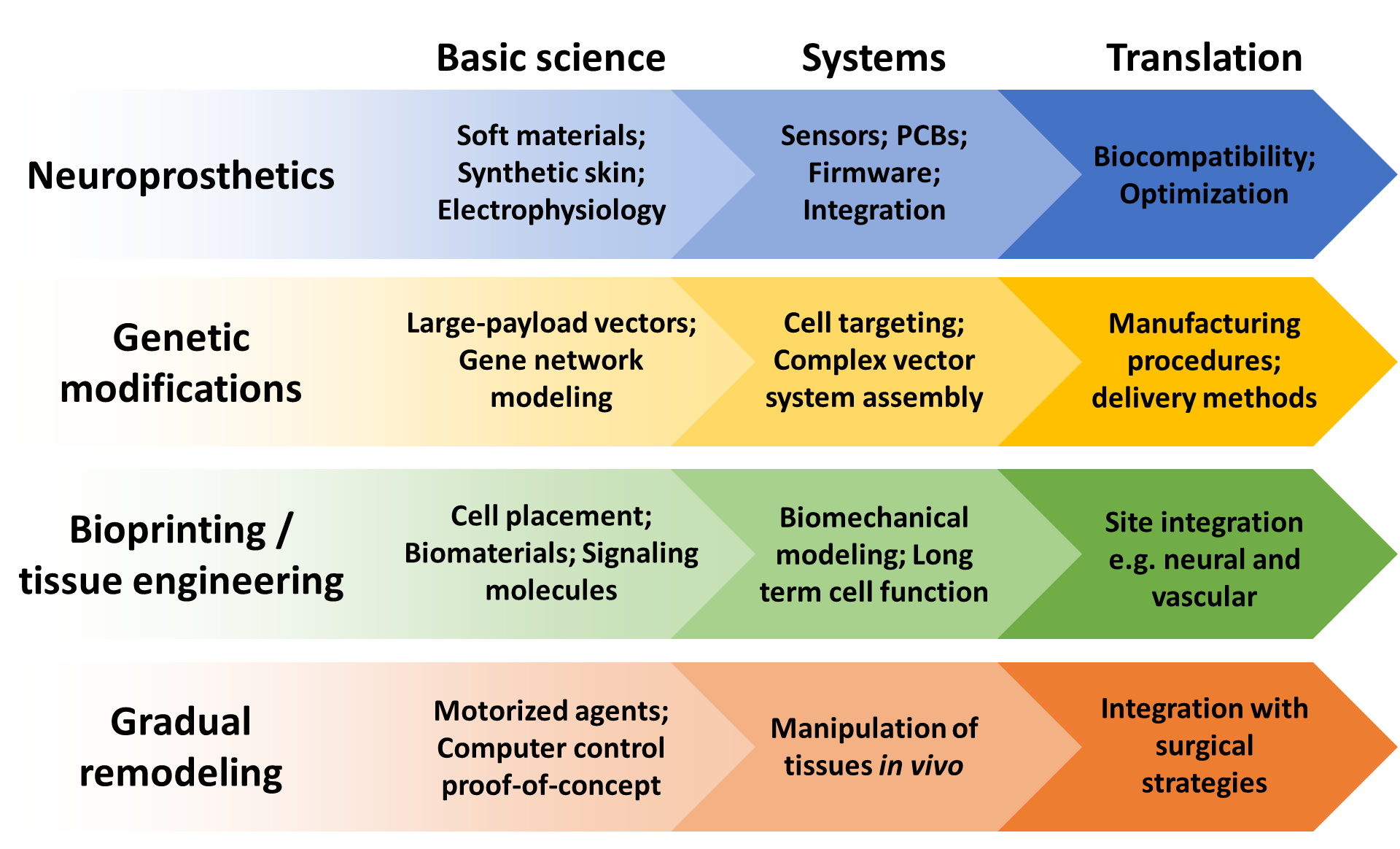 A full-body transformation into your desired form will necessarily be complex. We have some ideas that may help guide where our research goes. These aren’t set in stone – they’re outlines that explore a variety of reasonable possibilities for accomplishing morphological freedom. They include, in no particular order (1) neuroprosthetics, (2) genetic modifications, (3) bioprinting, and/or (4) remodeling.

(1) While these methods are presented separately, it’s likely that they’ll be mixed and matched for strategies ultimately arising from our research.
(2) We provide very broad strategic views of several research fields representing the collective work of thousands of scientists. These are necessarily less detailed than review articles in journals, to give context for our overall directions.
(3) This guidance document is not intended to be comprehensive or final. It is mainly intended to be a flexible source of inspiration for researchers, whether internal or external.

We’ve also prepared an in-depth white paper (PDF) that covers the below topics in more detail.

A “neuroprosthetic” is simply any prosthetic, a synthetic device on (or in) the body, that has a neural interface with the user, communicating with sensory and motor information, via nerves or the brain. Neuroprosthetics can take many forms, and provide a huge diversity of motor and sensory functions throughout the body. They have been an area of research for decades. Motorized limbs (e.g. arms) have been demonstrated, with various strategies of neural/motor interfacing that includes peripheral nerve electrodes, EEG electrodes, and electrodes placed in nearby muscles. Sensory prosthetics have also been demonstrated, such as for feeling touch and pressure, and even for tasks as complicated as invoking visual “phosphenes”, on the path to full image-forming vision.

Some of the most striking demonstrations of the power of neuroprosthetics include neural interfaces for thought-controlled usage of motorized robotics in paralyzed individuals. These include clinical trials of BrainGate, and the kick-off by a paralyzed individual of the 2014 World Cup led by the Nicolelis lab at Duke (NIH NINDS, 2012; Smith, 2014). Equally as important, recent developments in tactile perception and proprioceptive feedback suggest that fully functional neuroprosthetics are nearing reality (Graczyk et al., 2016; Marasco et al., 2018; Park et al., 2015; Tabot et al., 2013; Tee et al., 2015).

We can say that if neuroprosthetics could be properly harnessed, they would allow for significant customization of one’s appearance and capabilities. Motorized neuroprosthetics could even permit the creation of wings and tails, while neural-interfaced synthetic skin could accommodate changes in skin texture, visual patterns, fur, scales, feathers, and so forth.

Even so, we would love to see additional work on these areas to see neuroprosthetics brought to their full potential:

Genetic modifications are some of the most frequent ideas mentioned in our discussions with people who want to bring about morphological freedom. And for good reason – there’s tremendous potential even in current gene therapy strategies. With the broadening deployment of CRISPR, there’s ample substance behind the excitement to say that genetic modifications may be useful for attaining morphological freedom.

Gene therapy strategies involve the introduction of new, engineered DNA (or RNA) to cells, whether those cells are inside a patient, or outside the body with in vitro culture. A vector is used to deliver this new information. Commonly, the vector is derived from a virus. The viral ‘coat’ is taken, but not the rest of the virus – this takes advantage of the virus as a delivery vehicle, but doesn’t allow it to produce more of itself. There’s countless examples of vector usage in literature, with exciting results in both basic science and clinical translation. Many are now in the middle of human clinical trials (ClinicalTrials.gov, 2018) while approvals for clinical usage are starting to trickle in, including Luxturna (AAV), Glybera (AAV), and Strimvelis (a retrovirus) (FDA, 2017; Gallagher, 2012; Pollack, 2012; Regalado, 2016; Spark Therapeutics Inc, 2017).

What might the genetic modifications entail? They might deliver regulators of metabolism and cell growth, they might manipulate developmental morphogen signaling, they might regulate cell adhesion or structural properties (e.g. through adhesion and cytoskeletal genes), or they might control transcription factor networks to manipulate the differentiation status of cells, just to name a few possibilities. The possibilities are nearly endless.

The fundamentals of genetic modifications are well established, but we want to see researchers in the field push boundaries, especially in these areas:

Bioprinting is a massive new development in the capabilities of tissue engineering, involving the precise 3D arrangement of biological materials to form desired tissues for an organ. Further development and usage of this technology will let us construct new limbs, tails, organs, and any other new body part with exceptional precision and customizability while integrating seamlessly into the body.

Generally, bioprinting technologies involve deposition of a scaffold and/or stem cells. Several examples exist of this working as a method to grow organs in vitro (Murphy and Atala, 2014) and in vivo (Pan et al., 2016). Scaffolds are typically made from decellularized collagen matrices or other biocompatible, 3D printable materials such as hydrogels (Hinton et al., 2015) and perhaps even silicone rubber composites (O’Bryan et al., 2017). Dental repair and regrowth using a dentin-derived hydrogel ‘bio-ink’ to make ‘cell-laden scaffolds’ now allows teeth to be regrown (Athirasala et al., 2018).

Bioprinting is currently a very active area of research and development, with a lively mix of new biotech startups and involvement of larger, more developed companies. The importance and practical applications of bioprinting can’t be overstated.

Even so, we would like to see additional development, including (but not limited to) the following areas:

Biological tissue adapts to loads placed upon it. Dental braces are a common example of a way to guide this remodeling process. Bones, and the soft tissues around them, grow and shrink as needed to equalize stress channeled through the teeth into the maxilla and mandible.

Likewise, distraction osteogenesis (bone growth) is a surgical technique used to produce large morphological changes in bones (e.g., craniofacial bones and leg bones) and their surrounding soft tissues (Wikipedia, 2018). The surgery is usually an outpatient procedure, and is associated with discomfort but generally not pain (Quitmeyer, 2018; Wikipedia, 2018). Conceptually, it involves the partial or complete separation of bone into two parts, and gradual separation of those halves as new osteogenesis takes place. Gradual separation may involve steps, or continuous tension from a spring (Wikipedia, 2018). Outcomes of distraction osteogenesis are at least on par with, and are likely superior to, those of conventional acute surgeries (Kloukos et al., 2016).

It’s easy to suppose, then, that with careful application of remodeling technologies, it would be possible to substantially alter someone’s body shape gradually, through self-regulating and self-limiting processes, while preserving their musculoskeletal, neurological, and other functions. Therefore, we want to support the investigation and development of technology and surgical techniques that exploit these principles to yield desired morphological changes.

We would like to see additional developments in these areas:

Page load link
This site does not use cookies for tracking or analytics. We don't collect or use your personal information here. With your permission, third party services (YouTube and SoundCloud embeds) will be used to improve your experience, but those services use additional cookies. To find out more, please look at our Privacy Policy. Privacy Policy last updated 2022-03-18. Settings OK
Go to Top